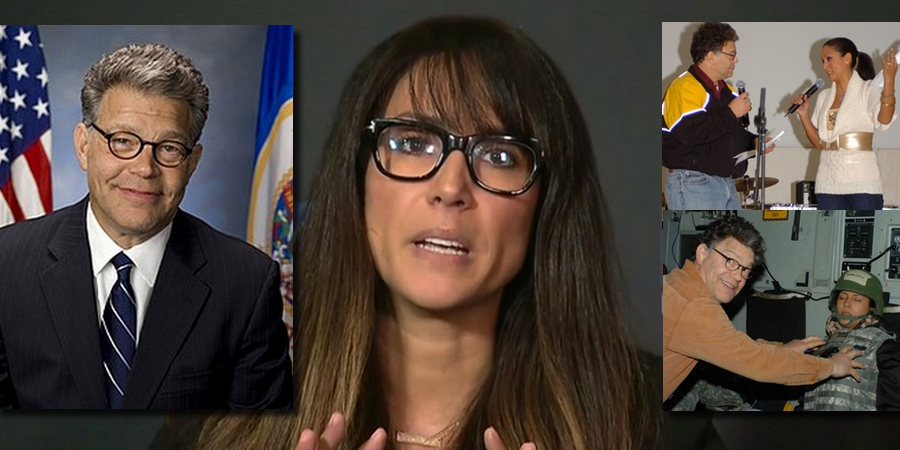 WISCONSINREPORT.COM 11-17-20017 – Let’s get real. It was bound to happen. The stampede of ME-TOO-ism is muddying up the waters and, unintentionally, I’m sure, dirtying some fine people who have been doing some otherwise great things. Some of them, such as Minnesota U.S. Senator Al Franken (above photo insert-left), have apparently not done anything terrible enough to warrant them resigning. In Franken’s case, it’s just does not appear to be warranted.

Model, sports commentator, and radio personality, Leeann Valez Tweeden’s (above photo-center) story of her memories of her brief appearance with Franken in 2006, makes for interesting and very viewable television. She has most recently been part of a KABC radio show called McIntyre in the Morning with Doug McIntyre & Leeann Tweeden. Her Franken story has catapulted her onto a national stage not seen before joining the MeToo women of the world.

Tweeden has admitted she wanted to be part of the MeToo brigade of women telling of their grievances about the past bad behavior of men. As a result she brought out the memory of, what she felt, was an unwelcome kiss from Al Franken in 2006. She did so, so she could, as she put it, “stand on the shoulders” of the many MeToo women. However, if one listens to her lengthy account, carefully, the incident she tells about is not really that damning.

There are several videos on the internet that are recordings of on-air interviews from appearances and pieces of the conversations in news reports. Since her story broke, she has appeared on a number of programs on different national channels. I have viewed many of them, including her live appearance of ABC’s The View, Friday, November 17, 2017. Nearly all of what she said on that show closely followed the other accounts she has given in other interviews I have seen. Toward the end of The View appearance, Tweeden read from a letter of apology that Franken had written to her. She accepts his apology. 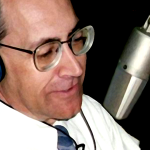 From what I can tell, Franken didn’t seem to do anything with malice. He was a professional comedian in 2006 who came out of the usual shenanigans of Saturday Night Live. He wrote and participated in a USO skit for a youngish military audience, which included a kiss. She said she had given Franken prior consent that she would participate with him in whatever he would write for the skit, according to LeeAnn Tweeden’s account. It was during the initial rehearsal of the skit that, apparently, a kiss took place that she says she didn’t expect.

Leeann explained that Franken kissed her once during rehearsal after she said “whatever”, when he suggested they should kiss, because that was part of the skit he had written. She apparently was surprised he took the vague answer, “whatever”, to mean he should or could kiss her, so he went for it. According to her account, she didn’t like the kiss and showed her disapproval to him. He never planted his lips on hers after that lone “rehearsal” kiss, even though the two performed onstage several times in front of audiences after that during the USO tour (above photo-insert top right).

In addition to what she perceived to be the lone, unappreciated kiss, she also, publicly accused Franken of “groping” her. That choice of words has gotten plenty of play in cable news discussions and written, published accounts in newspapers and the internet. There has been plenty of talk, Tweets and Facebook posts about the “so-called” groping.

It turns out, the staged photo of Al, apparently groping her breasts (above photo-insert bottom right), does not show him actually doing it, just jokingly posed to look as though he was. Remember, he was a comedian, posing for a sight gag, not actually, physically, groping the sleeping Tweeden. Nothing damning here. The only memory of the “groping” in her telling, refer to the photo, which was not a real “groping”, but posed to look like he was about to grope her while she slept. So, the “groped” part of headlines was hugely inaccurate.

The whole incident did not take place while Al Franken was a United States Senator from Minnesota. Even though there’s really nothing terrible about Leeann’s experience, it took place in 2006, when Franken was still a comedian. He wasn’t elected to represent the state in the U.S. Senate until two years later.

In any event, Franken says he doesn’t remember the rehearsal kiss quite the same as Leeann Tweeden, and these many years later, in retrospect, he isn’t as proud of the posed “groping” photo. It’s just not as funny now as he thought it would be when the humorous bent was still running through his veins in 2006, way before he became a more serious person as a U.S. Senator in 2009. 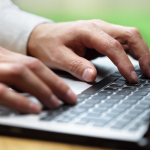 Alan Stuart Franken (Democrat) is an American politician serving since 2009 as the junior United States Senator from Minnesota. He has been serving honorably in that position ever since, furthering and defending the call for Net Neutrality and other internet and human rights related issues. He has also been a stanch supporter of legislative projects involving health, women, children and families.

As an example of his normal treatment of women, in general, a group of seven former staffers are defending Franken. An article in the publication called The Hill, quotes the group’s statement thusly: “Many of us spent years working for Senator Franken in Minnesota and Washington. In our time working for the senator, he treated us with the utmost respect.”

The Friday, Nov. 17, 2017 statement from the women, went on to state: “He valued our work and our opinions and was a champion for women in both the legislation he supported, and in promoting women to leadership roles in our offices.” The statement was signed by Katherine Blauvelt, Alexandra Fetissoff, Jessi Held, Natalie Violin Lehr, Charlotte Slaiman, and Bethany Snider.

It is unfortunate that this kind, thoughtful, caring, well-meaning, patriotic person, is having his good name bandied about in the same breath as some of the other, less favorable, political names in the news lately. To my careful thinking, the Leeann Tweeden vs Al Franken situation does not deserve to be discussed in the same breath with any of the MeToo stories being brought to the light of day.

As a result of the Tweeden story, the Majority Leader of U.S. Senate Republicans has suggested there should be an ethics probe into Senator Franken, who, incidentally, has been a thorn in the side of Republicans and Conservative Radio and TV Talkers for years. Perhaps, the Tweeden story of this relatively, innocent incident, that took place before he was a U.S. Senator, may be his political downfall. Franken, to his credit, says he will cooperate in any ethics probe, should it take place.

Tweeden says she didn’t expect a Senate hearing, and doesn’t want it. In fact, according to comments she has made, Tweeden is not, and was not, interested in harming Franken, or punishing him, when she joined the MeToo effort in this way. She was simply telling her story. However, based on negative comments in the news media, social sites, and commentators, it seems, Franken is, indeed, being punished mistakenly, and unfairly, because, he is being made into something, that, he is not.

NOTE: Gary W. Morgan, a/k/a GabbyGary, is a semi-retired over-the-air radio broadcaster and newspaper person, who was involved in both news, entertainment and advertising from 1967-2000, after which Gary ran, unsuccessfully, for a Wisconsin State Assembly seat. Gary now writes and edits news for an independent online news publication called WisconsinReport.com (WiscReport.com). Gary also programs the music on GreatGold Classic Hit Oldies Internet Radio (GreatGold.fm), builds and maintains several other websites, and performs additional duties from time to time, in a semi-retired way.