WISCONSINREPORT.COM (05/11/2015) – Teyanna Marx-Loether, Sauk City, Wisconsin,  went through three days of the Alice In Dairyland selection process along with the rest of the crown seekers during the Mothers Day weekend. She is now a happy young lady, because she came out the victor.

Alice travels all 72 counties to share information about the state’s agriculture news and helps the public understand some of Wisconsin’s biggest industries.

Teyanna Marx-Loether (shown in the photo at the left) grew up on a dairy farm. She is graduating from UW-Madison with a master’s degree in Animal Sciences.

“My lifelong goal is to communicate the positive impacts of agriculture,” Marx-Loether said in a statement. “As the 68th Alice in Dairyland, I would bring a creative flair to communicating the strength and diversity of Wisconsin agriculture.”

Being part of the royalty class is not something new to Marx-Loether. She was Sauk County’s 2010 Fairest of the Fair.

The Finale Program allowed an audience of hundreds to see the hard work of each candidate culminate in their final presentations. The candidates presented a 60 second agri-business talk focused on an agri-business toured while in Manitowoc County and also a three minute final presentation focused on how we can grow Wisconsin agriculture forward. The presentations also helped the audience learn more about agriculture in Manitowoc County and throughout the entire state of Wisconsin. 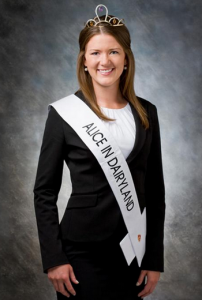 The current Alice, Zoey Brooks, has been serving as the 67th Alice in Dairyland. As Wisconsin’s agriculture ambassador during the past year she was educating audiences across Wisconsin about the $59 billion economic impact and importance of Wisconsin’s diverse agriculture industry. A native of Waupaca, Zoey grew up as a member of the sixth generation working on her family’s dairy farm.

Brooks graduated in 2014 from the University of Wisconsin-Madison with a degree in animal science.  She served as Dane County Farm Bureau’s Ag in the Classroom coordinator and as a Director At-Large for her Collegiate Farm Bureau.

Zoey Brooks has held internships with the Food Export Association of the Midwest and with UW-Extension. Brooks has also gained experience working with the Wisconsin Land and Water Conservation Association.  Following her year as Alice, she looks forward to returning to production agriculture on her family farm.

Alice in Dairyland is a one-year, full-time public relations professional employed by the Wisconsin Department of Agriculture, Trade, and Consumer Protection (WI DATCP). Each year, Alice in Dairyland travels more than 40,000 miles throughout the state, promoting Wisconsin agriculture to various audiences. During her year, Zoey took part in hundreds of media interviews, speeches and school presentations.

Manitowoc County was the host for the 68th Alice in Dairyland Finals. Agriculture works hard for Manitowoc County every day.  Family-owned farms, food processors and agriculture-related businesses generate thousands of jobs and millions of dollars of economic activity.

A number of Wisconsin organizations contribute to the Alice in Dairyland program: Loether will wear and keep a custom mink garment to promote Wisconsin’s fur industry, courtesy of the Kettle Moraine Mink Breeders Association. She will travel around the state in an E-85 flex-fuel Chevrolet Tahoe from the Wisconsin Corn Growers Association.

While working, Loether will wear a 14-carat gold and platinum brooch or tiara, featuring amethysts and citrines, two gems indigenous to Wisconsin. The tiara and brooch are courtesy of the Wisconsin Jewelers Association.

The other finalists were Cassandra Lynn Mayer, 23, of Slinger; Stephanie Marie Nagel, 24, of Valders; Dormie Gay Roberts, 22, of Burlington; and Kristin Marie Klossner, 27, of New Glarus.