WISCONSINREPORT.COM (11/2/2014) [MUSIC] – Some of the finest music from the greatest singers and bands in the world of music can always be heard, 24 hours a day at streaming Greatgold.fm Internet Radio, the home of Classic Hit Oldies and GreatGold Hits. However, during the month of November, 2014, there’s even more to enjoy.

In addition to streaming Extra Plays of Hit Favorites by November Born music artists this month, November, 2014 finds the internet-only station playing Rock and Roll Hall of Fame Nominees for 2015 induction into the RockHall and Museum at Cleveland, Ohio.

Music lovers can visit www.rockhall.com to cast votes for 5 of 15 nominees whom you believe to be most deserving of induction at the ceremony next year. 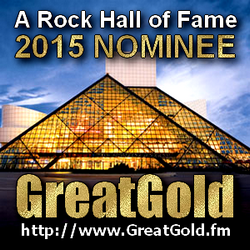 You can hear the GreatGold Internet Radio oldies mix at their GreatGold.fm website (click on Listen Now), as well as at the McStreamy.com Player-Directory, Clik2Go.com and on most, popular, mobile apps, including NoBex, RadioTuna, VirtualRadio, ooTunes, TuneIn, and others (search for “greatgold” on the apps and directories).